On World Car Free Day, September 22, people enjoy their city or town as it can be without cars in locations all over the world. Some cities offer free public transit. Here's what's happening around Princeton.
In a nod to Car Free Week, Princeton's first Fancy Women Bike Ride took place on Sunday September 18. Thirty women and girls dressed festively for this ride around Princeton (some brought their cool dads), showing that you can ride in friendship and in ordinary clothes. During the ride, the cry was heard: "We need bike lanes!" 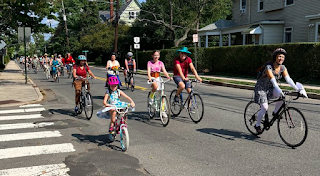 [Organizer Jessica Wilson and a young rider are seen leading the ride on Wiggins Street. Photo by Justin Lesko]
Girls in Gear, which aims to teach girls "life skills through bike skills" is offering an eight-week course at the Riverside School starting September 25.
Princeton University's Tiger Transit, which is free and open to the public, will soon introduce new electric buses on all routes.
Sustainable Princeton's ECOmmuter Fest is on Friday, September 30.
Talk to owners of e-bikes, then test ride one. Yes, there are e-cars as well. The PHS Bike Club is offering tune-ups and light repair.
Car parking is limited, so please walk or bike to the event if you can. Park your bike with PBAC's free Bike Valet and score an additional ticket to the raffle! 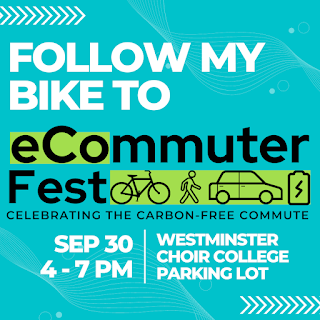 Posted by Princeton NJ PBAC at 9:40 AM No comments:

Princeton now has a "bicibus", a very special school bus formed by a group of children and parents who bicycle to school together, with more joining on the way. All it took was one parent who was inspired by a video of a bicibus in Barcelona. "Princeton needs a bicibus. So I started one."
Read more about the Princeton bicibus here.
A Streetfilms video on the Barcelona bicibus is here.
The Kidical Mass movement – "A child-friendly city is good for people of all ages" – started in Germany but has gone global, with rides organized as often as once a week to once a year, usually timed with World Car Free Day on September 22.
Posted by Princeton NJ PBAC at 12:03 PM No comments:

Weigh in: Replacement for Dinky

New Jersey Transit unveiled last week the options it is considering to upgrade the service between Princeton, Princeton Junction, and West Windsor.
Thanks to your prior feedback, they acknowledge "significant interest in ped/bike connections along the corridor". Three of the four proposals include a separated bicycle and pedestrian trail that will also connect to the towpath on the Delaware and Raritan Canal.
Voice your opinion on the proposed alternatives through this Transitway Survey;
ask questions or leave a longer comment through the public comment form.
Learn more about the project at https://www.njtransit.com/princetontransitway/
The NJ Transit presentation is available as PDF here.
There is a good overview by Walkable Princeton.
A few points that may not be obvious at first glance:
- Alternative 1 has two-way bus rapid transit (BRT) using both lanes of the roadway, and the light rail (LRT) shuttling back and forth on a single rail.
- A BRT system gives right of way to the bus, e.g. via a dedicated lane or "transit signal priority" which modifies the timing of traffic lights in order to minimise delays for the bus. This is what makes it "rapid". 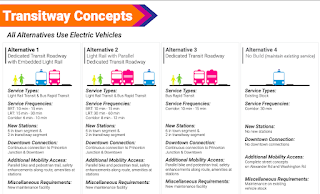 Posted by Princeton NJ PBAC at 9:50 AM No comments:

The East Coast Greenway riders will arrive in Princeton this Saturday, August 28th!  The funds they raise will go toward improving the trail in NJ, PA and NY.
400 cyclists will be arriving on the Palmer Square Green from 6-8pm where you'll find dueling pianos!  A Witherspoon Jackson location at 300 Witherspoon, will host food trucks and tents from 4-8pm.  A list of businesses to be confirmed, will include those of North Witherspoon, Leigh Avenue, as well as others interested in the event that are not on to Palmer Square.
On Sunday morning about 8:30am Mayor Freda will thank the 400 riders, the East Coast Greenway Alliance, and all those who helped and supported the event.
East Coast Greenway Alliance and its production partner, Global Impact Productions are still seeking volunteers to make the event successful. You can volunteer to help by heading to the sign-up page here.
For more details about the ride check out more details here and the day-by-day schedule from NYC to PHL here. 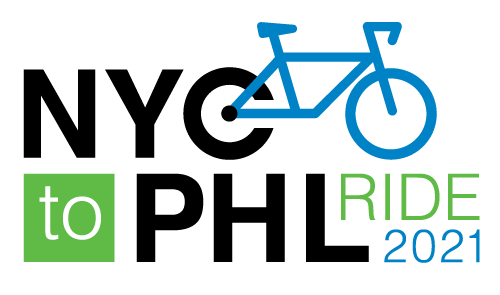 Posted by Princeton NJ PBAC at 10:30 AM No comments:

Because you walk, bike,  drive, or take the bus in town,
YOU know better than anyone  what works, what does not.
Help us make it safe & easy
to get around  in Princeton
Tell us:
Where do you feel unsafe?
What makes it hard to get around?
How could we make it better?

Take a 5-question survey!
– Online at bit.ly/PrincetonMobilitySurvey
– OR by in-person interview (Spanish interpreter available)
Send WhatsApp / Signal / text to (609) 933-5108 for appointment
Pass it on
Help us hear from everyone:
- young people, including those who don't (yet) drive
- seniors, who are among the most vulnerable on the road
- those who have difficulty accessing the online survey
- visitors to Princeton
- anyone else? 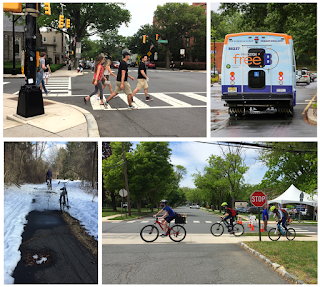 This survey is a collaboration between the Public Transit Advisory Committee, the Pedestrian and Bicycle Advisory Committee, and the Vision Zero Task Force; it is intended to inform our work to make it SAFE and EASY to move about in Princeton.
Posted by Princeton NJ PBAC at 11:38 AM No comments:

As days are getting warmer, we have a "hot" tip for children out and about on Princeton's roads: The Princeton Police Department have put out this
WARNING!!
If your child is caught doing the right thing they will be ticketed!! Officers will be on the lookout for kids being kind, wearing their bike helmet, helping others or just being a cool kid! If observed by one of our officers, your child will be given a ticket for a free kids Ice compliments of Rita's Italian Ice & Frozen Custard, located in the Princeton Shopping Center. 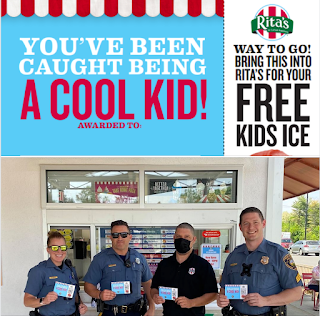 Thanks for keeping us safe in a *cool* way, Princeton PD!
Posted by Princeton NJ PBAC at 5:07 PM No comments:

Princeton's Pedestrian & Bicycle Advisory Committee (PBAC)
is a 2021 recipient of the Marty Epstein Advocate of the Year Award, which recognizes excellence in advocating for safer bicycle and pedestrian accommodations. The other 2021 Advocates of the Year are Jersey City Mayor Steve Fulop, NJBWC Advisory Board Member and its former Executive Director Cindy Steiner, and the Trenton Cycling Revolution organization.
The award was presented on Tuesday, June 1st at the opening of the Annual (virtual) Summit of the New Jersey Bike & Walk Coalition (njbwc.org), following keynotes by New Jersey Lt. Governor Sheila Oliver and U.S. Representative Mikie Sherrill (NJ-11th). Please follow these links for more information on NJBWC and the Summit program. 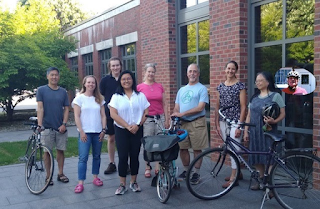 "PBAC is truly grateful to receive this award," says Lisa Serieyssol, PBAC Chair, "and our work has been possible because of the commitment of our members, and valuable guidance from our Liaisons, Councilman David Cohen and Municipal Engineer Deanna Stockton. We have been supported by our police officers, our public works staff, current and former Mayors Mark Freda and Liz Lempert, the Princeton Public Schools, in particular Acting Assistant Superintendent Dr. Robert Ginsberg, and community member and former Greater Mercer TMA educator Jerry Foster. We'd also like to recognize the earlier leadership of PBAC Chairs Janet Heroux and Steve Kruse, and former Council Liaison Tim Quinn."
PBAC has been involved in many successful projects including adoption of the Princeton's Bicycle Mobility Plan into the community Master Plan, leading to the installation of several bike lanes, 10 miles of Bike Boulevards, widened and rebuilt sidepaths, and increased bike parking. To make it easier for residents, students, and visitors to explore Princeton and access downtown by bike, PBAC recently updated the Princeton Bicycle Map.
In May 2018 the Beta Bike Lane demonstration project spurred interest in a more permanent solution which in turn led to an engineering corridor study to improve pedestrians' and cyclists' safety. The municipality is currently working toward the installation of bike lanes on this important east-west corridor.
PBAC's work has led to the adoption of a bicycle parking ordinance requiring bicycle parking facilities in conjunction with any development application.
Princeton Council's recent establishment of the Vision Zero Task Force in 2021 is the result of another initiative of PBAC and its commitment to safety. The task force is charged with drafting a Vision Zero Action Plan for the community.
In 2020 Princeton achieved the first in New Jersey "Silver" ranking for Bike Friendly Communities.
Posted by Princeton NJ PBAC at 3:41 PM No comments: